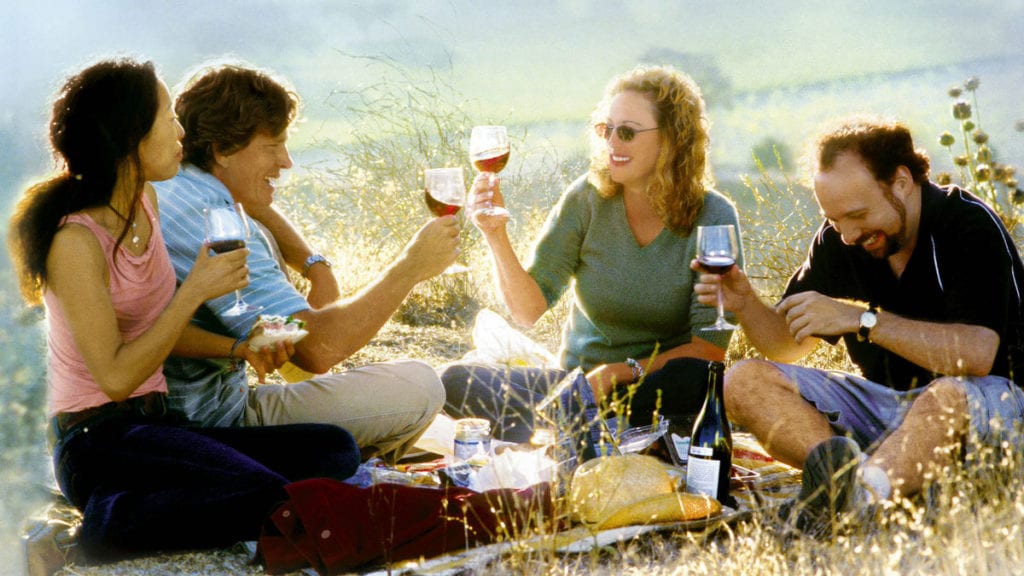 Listen to our Sideways episode on:

Are Miles Raymond and Jack Cole really friends? The principle duo of Alexander Payne’s bittersweet comedy Sideways seem to spend most of the film at best barely tolerating and at worst openly antagonising each other. In other hands, this could be one of the most misanthropic buddy movies ever made.

However, whether it’s in the writing, the direction or the career-best performances from Paul Giamatti and Thomas Haden Church – or, most likely, a combination of all of the above – Sideways manages to portray a genuine, if uneasy, mutual affection and co-dependency that underpins the relationship. Miles may disparage Jack’s emotional immaturity and lack of sophistication, but his spontaneous energy drags Miles out of his self-pitying comfort zone. Likewise, Jack has limited tolerance for Miles’ judgemental attitude, but he genuinely wants to see his friend happy, and when the chips are down he knows he can rely on Miles for support, however begrudging.

So if we acknowledge that Jack and Miles’ friendship is not an entirely toxic relationship, the next question becomes – does the film portray the death throes of that friendship, or just another chapter in a lifelong journey together? Strictly speaking, Rex Pickett’s novel, from which the film was adapted, does have a pair of sequels that reunite the duo, although with a reduced role for the Jack character. Given that the novels are apparently drawn heavily from Pickett’s own life, perhaps we can read into this that the gap between the characters would continue to widen over time, even if they never totally cut the chord.

Either way, fiction belongs to the reader once it’s put out into the world, and one of the things that makes Sideways such a durable film is how easily the viewer can read their own experiences of love and friendship into the characters. Watching the film for the first time, I identified heavily with Miles. Revisiting it years later, I found his snobbery and relentless self-pity a lot less sympathetic, and I warmed more to Jack’s optimistic energy and gentle tolerance, even in spite of his frequent selfishness and philandering. Perhaps a few years down the line I’ll have switched opinions again. Like a good bottle of Pinot, Sideways is a movie that only gets richer with age…

It’s a no-brainer for any Sideways sequel to reunite Jack and Miles on another booze-soaked road trip, and that’s exactly the direction both of us took this week. In this sequel, the action moves to Europe, as the duo head to Rome to celebrate Miles’ upcoming marriage to a clearly very patient Maya. However, some ill-advised airplane drugs lead to a wild lost weekend of boozing, berets and bizarrely named French hotels, plus a cameo from Zach Galifianakis in what may be the most disturbing role of his career…

As Harry observes early into this pitch, “Your stories are always about the thing you have the biggest problem with.” In this case, those problems involve reckless and relentless drunk driving with a touch of abandonment, as an older, sadder and no wiser Miles and Jack flee their shattered relationships for another trip around the wine country, only to find that the ghosts of their past aren’t so easy to get away from. This is also the first – though by no means the last – of our movie pitches to feature the phrase ‘nude burial’.

Our Sideways episode is available through iTunes, Stitcher, aCast and all your favourite podcast hosting channels. Your listens, reviews and subscriptions keep this show alive, so please lend us your ears and let us know who you think has the stronger pitch in the comments section below.

You can also find us on Facebook and Twitter, where we also welcome comments, follows and sequel ideas – plus suggestions for movies you’d like to see us cover in the future. Best submissions will get a shout out on a future episode, so get in touch and stay tuned for your fifteen minutes of podcasting fame…